High Dynamic Range (HDR) photography involves the use of more than one image of the same subject that are created with different exposures. These images are combined during post-processing using special HDR software.  The primary purpose of HDR photography is to record scenes that have a very large range of brightness,  too large to be recorded by current digital camera sensors...  like this photo of Diablo Dam.  On the day I was there, the light was horrible for photography - harsh and glaring.  By using HDR, I was able to control the tonal range in a way that resulted in a pretty, rather artistic photo, that looked more like the way the human eye would remember the scene. 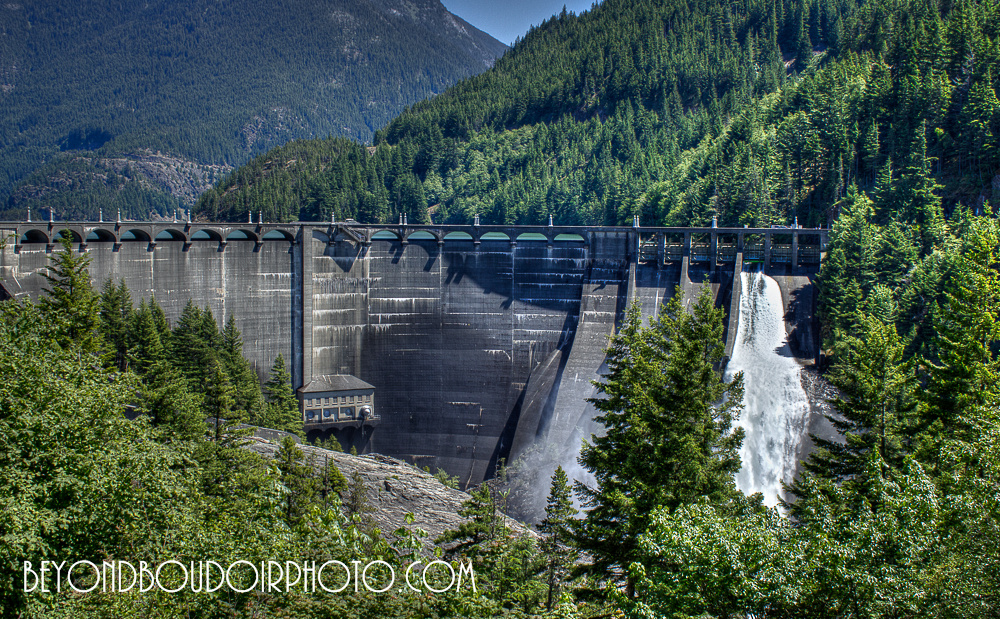 There are several HDR programs on the market.  The one I'm currently using is Photomatix Pro.  Some of the latest cameras have a built-in HDR function that will do the work for you, but of course with less control.

In the simple version of HDR, you take three images as fast as possible, using variations in shutter speed to provide the different exposures you need for HDR.  The camera must be on a tripod to keep the multiple photos exactly aligned.  As you might guess, moving subjects are a problem, so HDR has traditionally been thought of as something used for landscape and still life photography.  Photos of people were not considered a good use of the HDR technique.  If the person moved slightly between exposures, the resulting photo would have annoying ghost images.

I have always loved taking waterfall photos.  One thing a waterfall photographer quickly learns is that you don't photograph them on sunny days.  The contrast between the white water and the dark surrounding terrain is just too much for either film or digital cameras to record.  A few years ago, when I first heard about HDR, I eagerly tried an early version of Photomatix to process some waterfall photos.   Due to the moving water and waving tree limbs, my HDR images looked pretty bad.  I gave up on HDR for a few years.   Just recently I tried again and found that I could create a usable waterfall image by combining three photos in Photomatix Pro.  The software has become much smarter, especially when it comes to "de-ghosting" the images.   Not only that, but it is so good at aligning the images, you no longer need to use a tripod!  I put this to the test several weeks ago by shooting a three shot HDR series of Rainbow Falls in the North Cascades of Washington.  No tripod used. 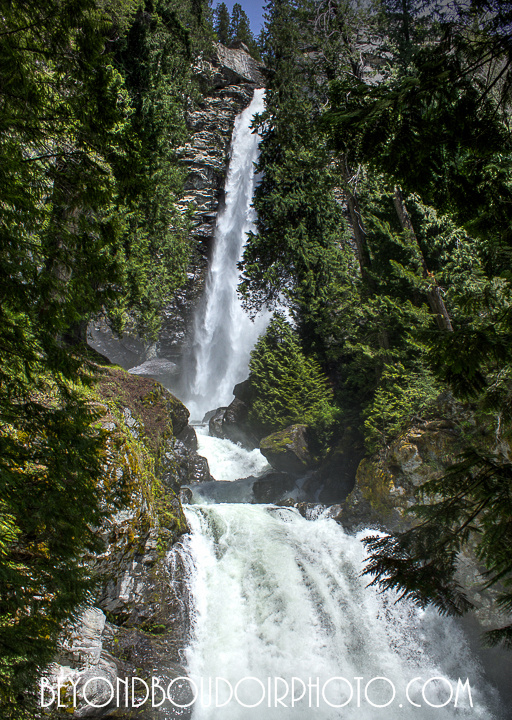 I was quite impressed at what Photomatix Pro could do with my hand held images.  There is no way I could have created a usable photo of Rainbow Falls with normal photography at the time I was there.   This photo was processed to give a natural appearance, but HDR has a reputation for creating wild, artistic effects that make photos look like paintings, as you will see in the next photo.

When I realized how much HDR software had improved, I decided immediately to find a use for HDR photography in my business of photographing people.  My first attempt involved an outdoor shoot with a gentleman who wanted a portrait of himself and his car.  I wanted to make use of a classic HDR effect -  dramatic, stormy skies.  We picked a spot that had a sentimental value for him and positioned the car so we could get plenty of sky in the picture.  It was June in Portland, so the skies had some pretty nice clouds already.  They were just too bright to capture in the same image with the subject and his car using normal photography.   I used a tripod to help line up the shot precisely. 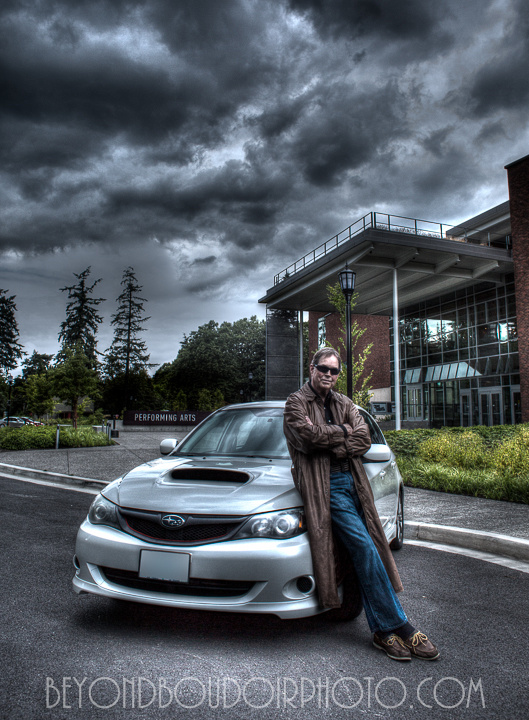 My client loved his photo, so I started using HDR for other outdoor portraits where I had a good view of the sky and some clouds to work with.  The following image uses a more realistic HDR processing mode.  Instead of the surreal style above, this one looks more like a regular photo.  The main effect of the HDR is to give us a dark blue sky with wispy white clouds, while properly exposing the subjects on their motorcycle.  Without HDR, the sky would have been a boring white.  I think this shot looks a bit like an old Kodachrome photo as seen on postcards a few decades ago. 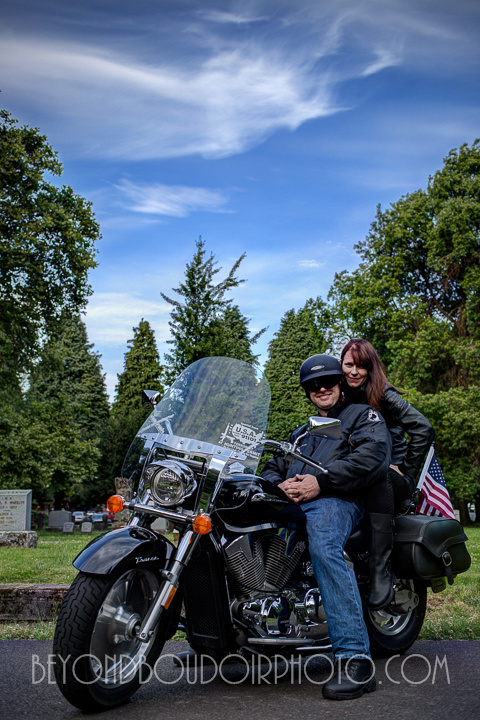 My next chance to use HDR was a shoot I did for a group of five "curvalicious" women who wanted to celebrate together at a local nude beach.  For this shoot I left the tripod at home and truly put Photomatix Pro to the test. 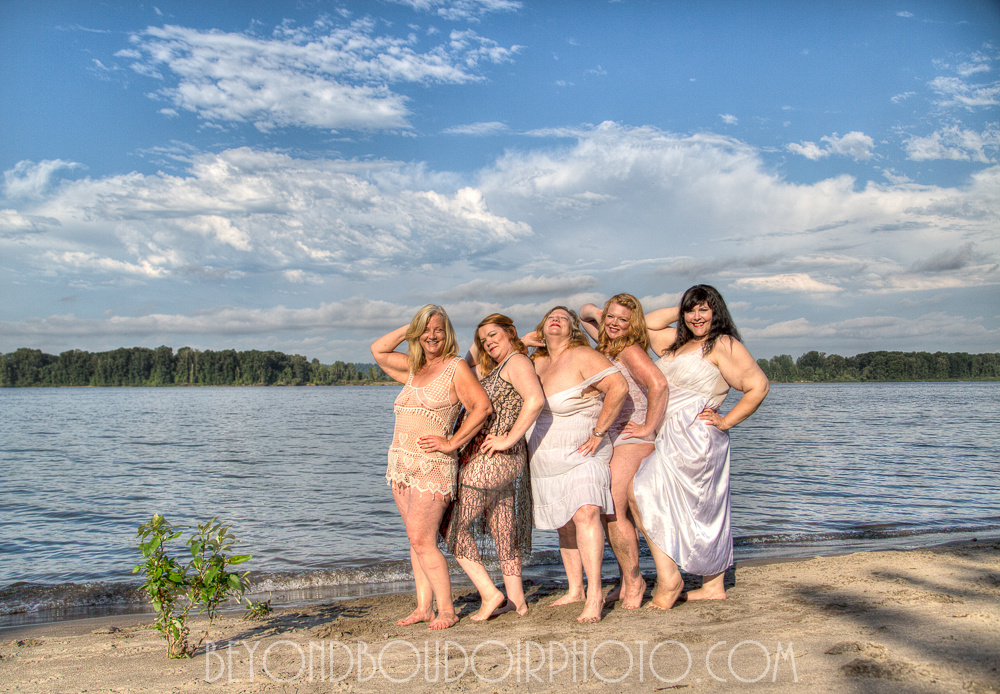 I did an entire photoshoot handheld including several HDR images.  I found that I could choose various processing options to create a fantasy look.  More images from this shoot will appear in a future post.

This post may be updated as I find more uses for HDR photography in my work.