The Last Outdoor Photoshoot of 2017

About every three or four years, Portland is blessed with an Indian Summer.  In October of 2017, we had many days of dry, sunny weather as the leaves began to turn.  I didn't have any outdoor photoshoots lined up to take advantage of this amazing weather, but I could not just let it go to waste.  I had to scramble to arrange one.

There is a hidden place on the edge of a rocky cliff that overlooks part of Northeast Portland.  You can't see it in the photos, but there is a busy freeway directly behind the model and about 200 feet below.  I've been watching this place for a while to see if had enough privacy for a nude photoshoot.  As is usually the case, it depends on when you go there.  In this case, we did the shoot on a Sunday evening just before dusk.

I needed a model who I could trust not to get too frisky on the edge of the cliff.  She would need to be OK with semi-public nudity and hardy enough to handle the cool breeze for a while.  The freeway noise would make it hard to communicate, so I also wanted a model who could instinctively create good poses.  One name came immediately to mind,  Floofie!  She's something of a local treasure who is very active in the modeling community.  Fortunately she said yes and I then had about 24 hours to plan the shoot. 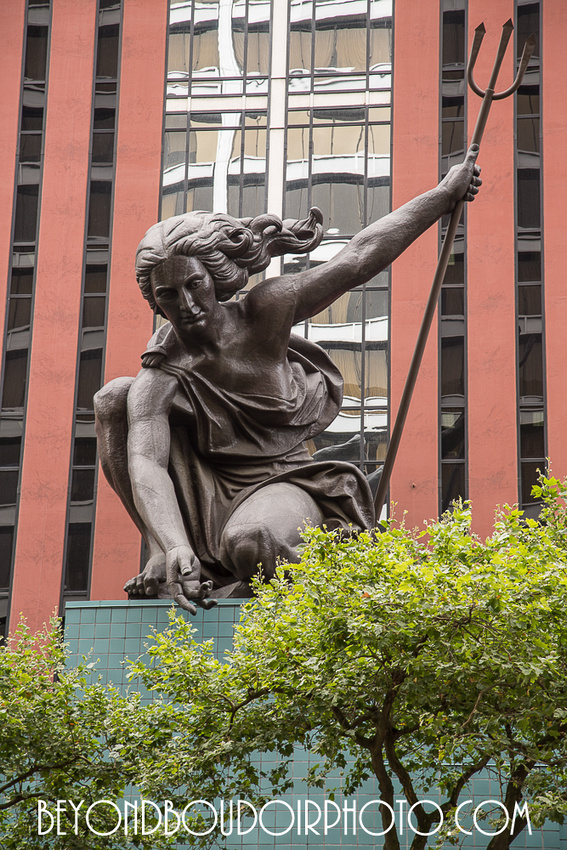 While I was trying to think of a theme for the shoot, I happened to look at a photo of a popular statue in downtown Portland that I'd used as a backdrop for photoshoots in the past.  It's called Portlandia and is considered one of the many quirky things found in the city.  I checked in with Floofie the morning of the shoot and told her I wanted her to dress as Portlandia.  I promised to pick up a trident at a local costume shop and she immediately loved the idea.

For this shoot, I used only one lens, the Canon EF 24-70 L Mark 2, which was mounted on my trusty Canon 5D Mark 3.  Although there was a little bit of light from the setting sun behind me, most of it would be blocked by trees.  I knew I'd need some pretty powerful fill light to balance the fairly bright background.  I used two of my AlienBees monolights, each powered by a Vagabond Mini battery and nicely diffused by a small umbrella.  I didn't want to use big umbrellas due to the wind.

First I took several shots to determine the best exposure for the background, making sure that the shutter speed was below the flash sync speed of my camera (1/125th was my choice).   Then I turned on the strobes and adjusted their power output to give me just the right amount of illumination on beautiful Floofie.  Some people call this technique "dragging the shutter" but I don't think that's a good description myself.  By the way, this was all done manually, no TTL flash metering for me! 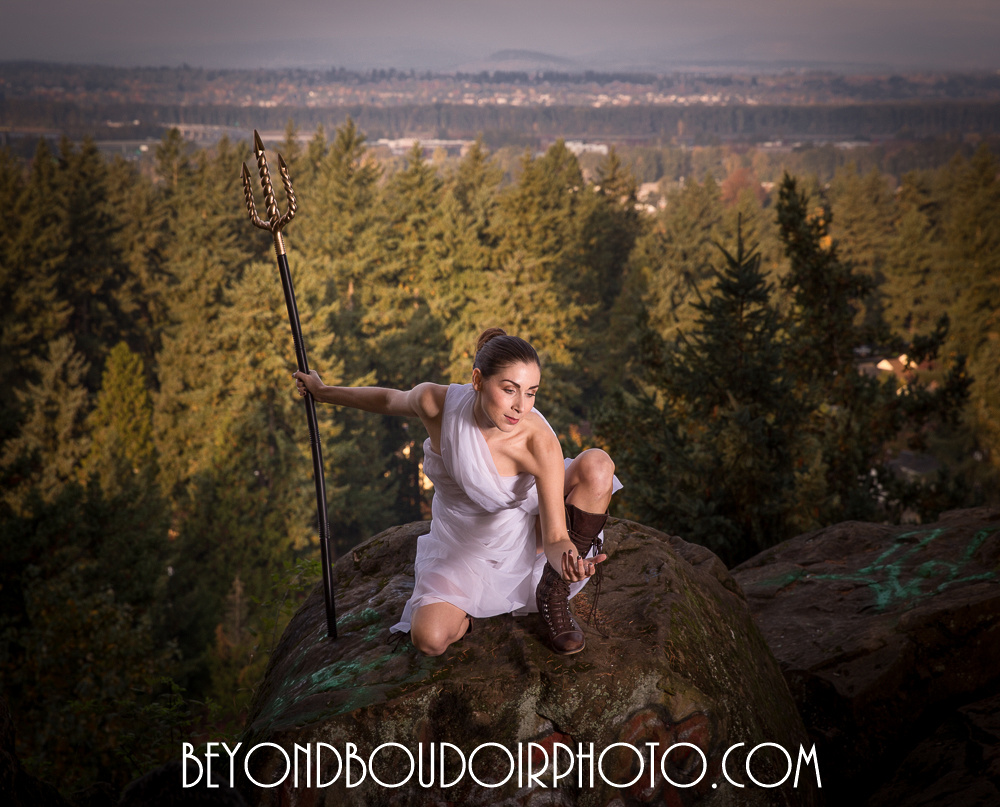 It's always good to have another person along when you are doing naughty outdoor photoshoots.  This time I brought along my photobuddy Jeremy and we shared the AlienBees by each having a trigger on our cameras.  The AlienBees cycle pretty fast so this worked most of the time.  Here's Jeremy next to one of the strobes, so you can get an idea of the setup. 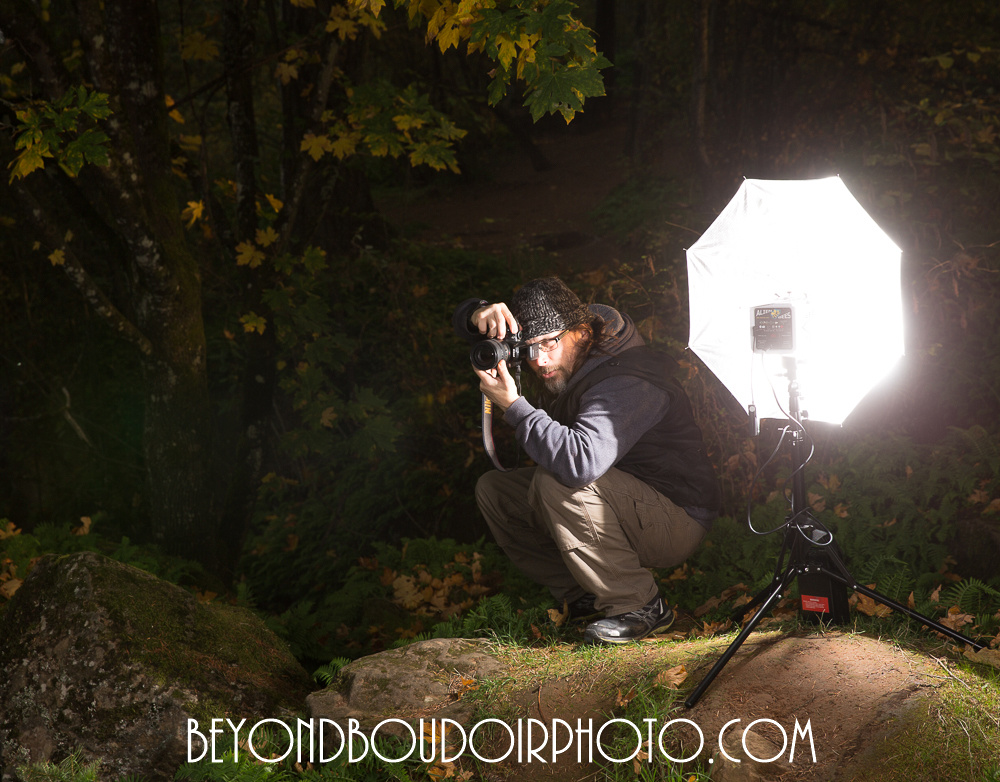 Occasionally, I'd trigger a shot right after my friend had done so and the strobes would not fire.  The background still looked the same, but Floofie was quite underexposed, at least two, maybe three stops.  Since I shoot RAW, I was able to brighten her up, but it really changes the tones of the image.  you can see what I mean in the image below. 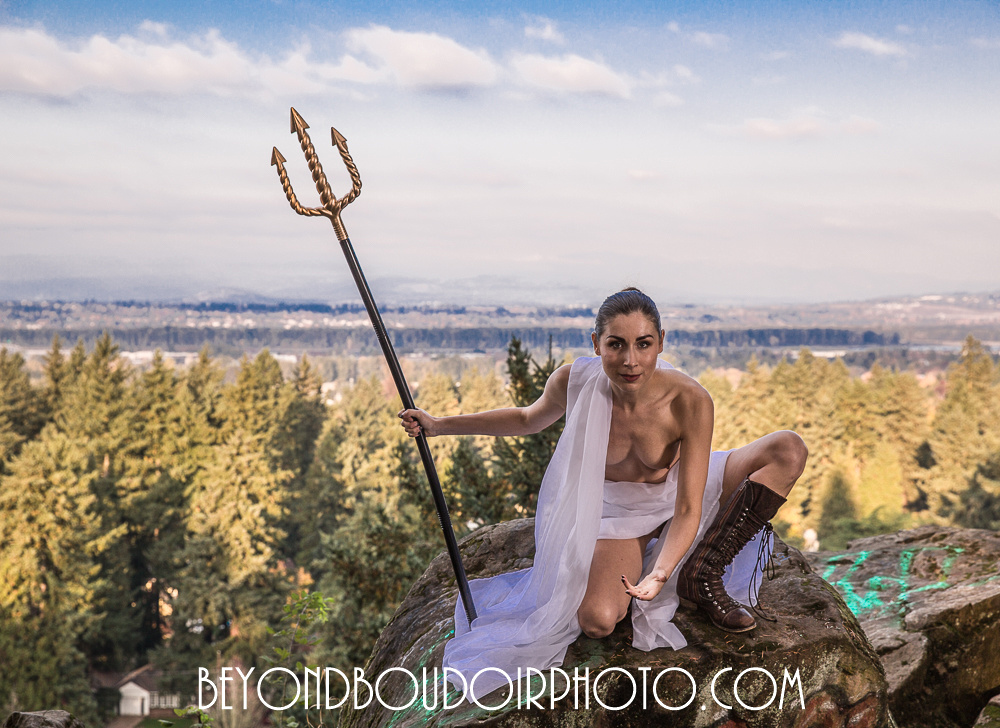 The strobes fired just fine at least 90% of the time, so I got some nice shots like these of Portlandia in super hero mode protecting the city. 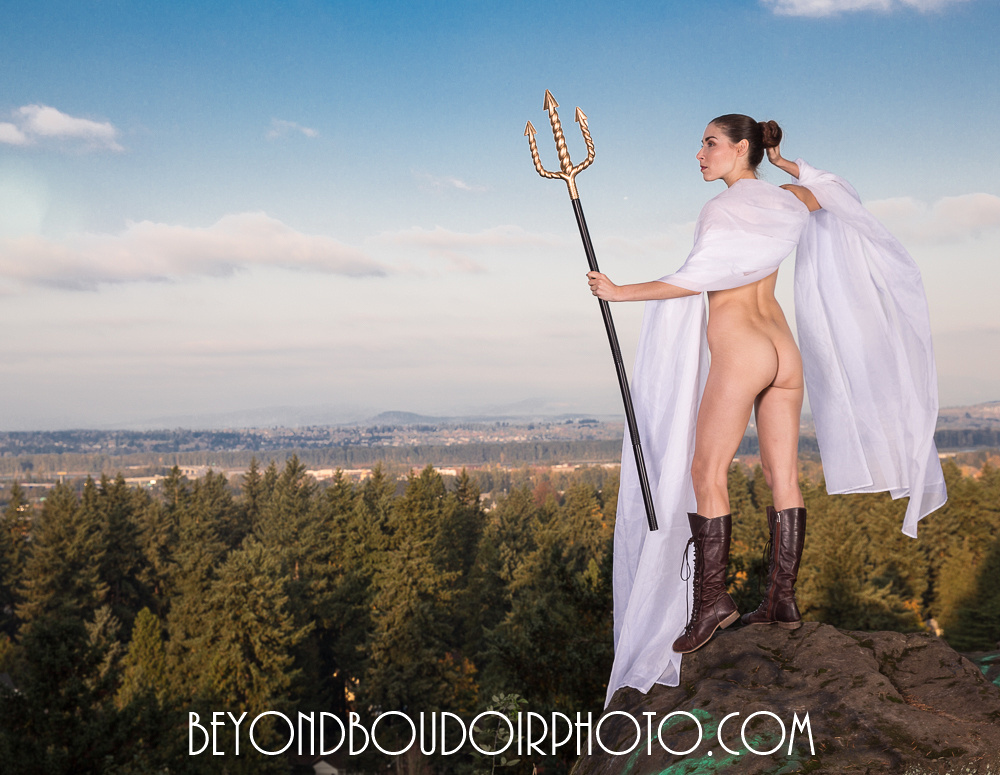 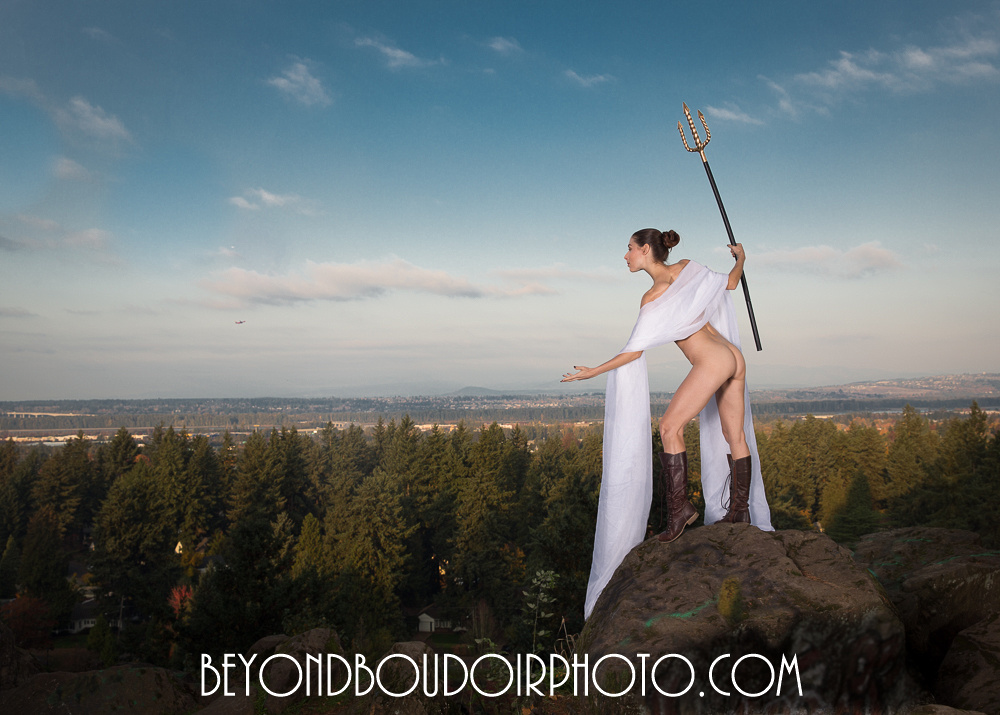 Before we wrapped up the shoot, I removed the trigger from my camera and moved to a position where I could get shots of Floofie against these trees.  There was a little daylight coming through the trees from the setting sun to my right. 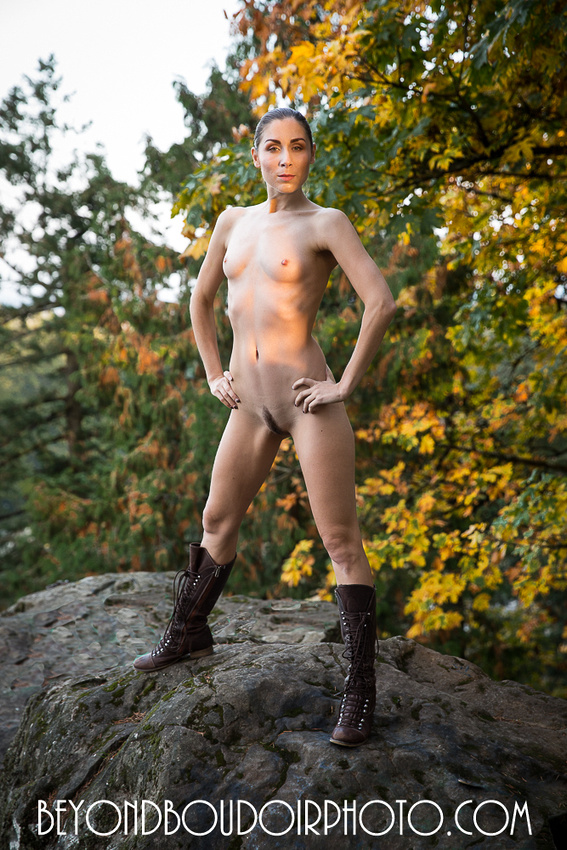 I'm pretty sure that's the last outdoor photoshoot for me in 2017.  If you'd like me to photograph you nude outdoors, we will have to wait until around May of 2018.  Unless of course, you'd like to pay me to come to your place in the lovely desert Southwest.   Thanks for reading!

Norbert Bednar(non-registered)
I am glad to read this article.
No comments posted.
Loading...