The Mysterious UFO on the Nude Beach at Sauvie Island

There are two well known nude beaches in the Portland area.  One is Collins Beach on Sauvie Island.  The island is a big flat area made up of farms and wildlife areas.  Being very close to the city, folks flock here for recreation when the weather is nice.  Some ride bikes on the two lane rural roads, some go birdwatching and some visit the beach.  In the Fall, various farmers make extra money by luring tourists to corn mazes, produce stands and harvest festivals.

Collins Beach, the clothing optional section of the river front, is the location of one of Portland's weirdest sights.  It's an old, derelict boat that looks like a UFO. 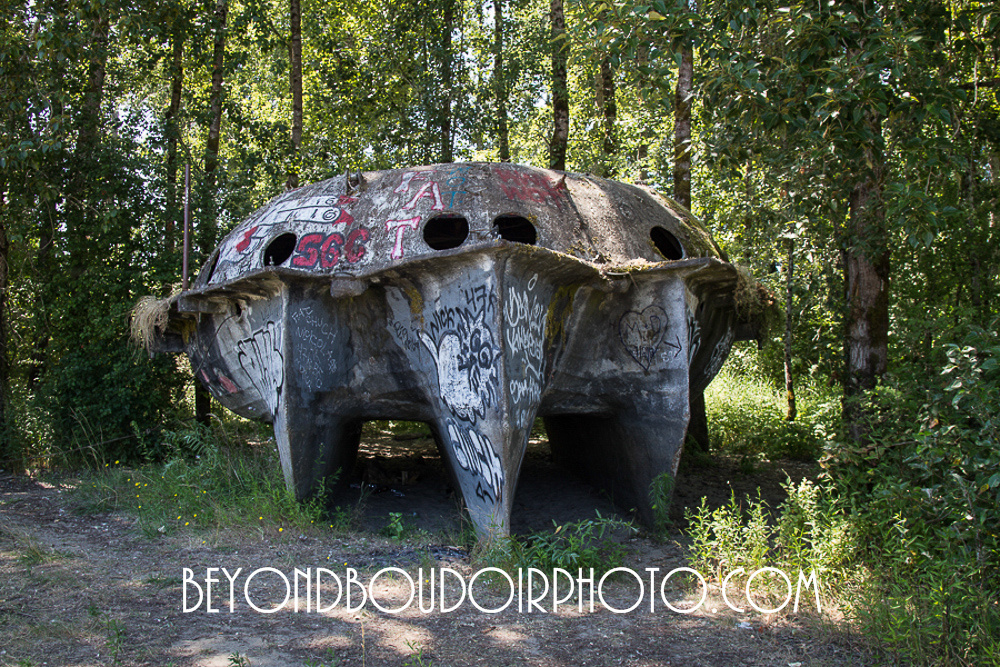 Its origin has been a mystery for many years.  There is a post on an internet forum by a fellow who claims his father built the boat in 1971 and the family used it for recreation on the lower Columbia River.  Nobody knows what happened after that, but apparently it broke loose from where it was moored and drifted ashore on the nude beach.  This may have happened during the big flood of 1996, but nobody seems to be sure.  The boat is now fastened to the trees with two stout cables, so it isn't going anywhere unless the county park authorities decide to remove it.

Marine enthusiasts love to speculate about how and why it was built.  My guess is that it was intended to be a party boat for family fun.  The boat is built of concrete over steel mesh.  It's about twelve feet tall. There is no sign of any engine, so I assume it was powered by an outboard motor - most likely a couple of big ones, due to it's mass.  But then a party boat doesn't need to go anywhere in a hurry, so who knows?

The interior was gutted a long time ago and everything that could be removed is long gone.  If you decide to climb around on it, make sure your tetanus shot is up to date.  Oh, and watch out for the wasp nest that is often found inside!

Update: here is a link to a local TV news story about the mysterious boat!

Update:  Please note the comment below by someone who is familiar with the boat.

Vic(non-registered)
My stepdad, Richard Ensign, designed and built this . I was 13-15 years old during this time and spent a lot of time working on it. He envisioned a time of economic and social collapse and was thinking of a way that people could cheaply build sturdy and seaworthy boats and escape the chaos and live off the land. This boat was launched in 1973. It was a sailboat and had two large main sails and a 6 cyl car engine with a conversion drive system also designed by Ensign. The total cost to build this, including engine, sails and controls was around $10,000. The hulls are filled with foam. It did indeed end up there during the 96 floods. Very cool to see this ! Richard Ensign passed away several years ago...his visions of social and economic collapse may still be viable....
No comments posted.
Loading...