The Best Lens for a Foot Fetish Photoshoot

What's The Best Lens For A Foot Fetish Photoshoot?

A friend recently asked me to shoot some photos for her foot fetish web site.  I find virtually all fetishes fascinating, so I readily agreed if she would allow me to share the images with you.

When I do fetish photoshoots, I take advantage of the opportunity to learn about that particular fetish from my model. My friend Faune explained that she wanted more than just simple images of her feet; her clients were also interested in shoes and socks, as well as the angles at which her feet were displayed.  Even her posture and facial expression would be important. 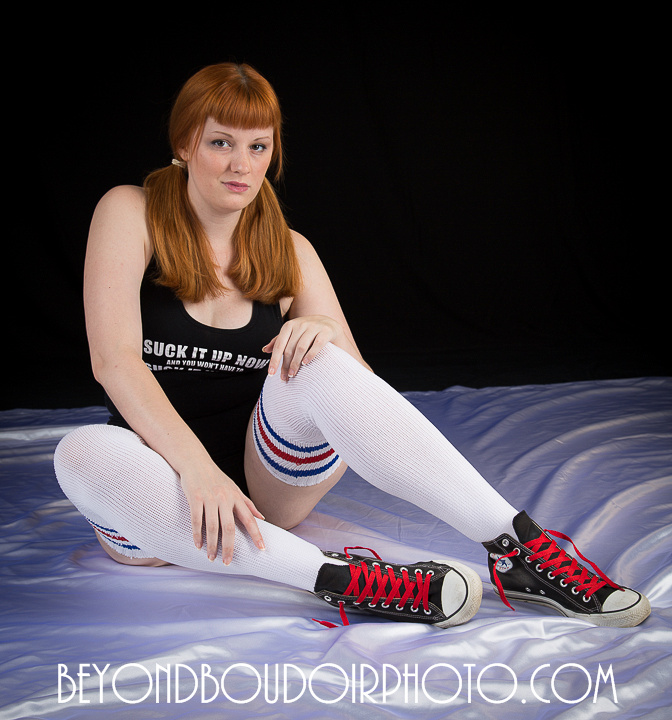 As I prepared for this photoshoot, I had to think pretty hard about which lens would be best.  You might enjoy hearing a little about what goes through my head when I'm planning a shoot, so here goes:

Sometimes I use several prime (single focal length) lenses and switch lenses a lot during the shoot.  I make the switch when I tell the model to change positions.  However, for this shoot, the model knew more about what she needed than I did, so she would be directing me.  I felt that I had to be ready to shoot without making her wait for a lens change. That meant I needed a zoom lens. 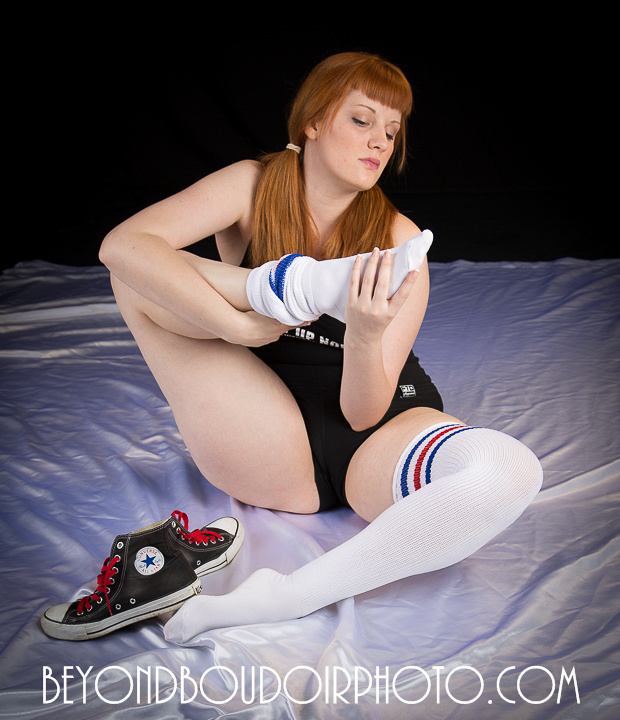 I had two zoom lenses available, a Tamron 28-75 F/2.8  and a Canon 24-105 F/4 L IS.   I have used both enough to trust them.  The Tamron is much smaller and lighter, but the Canon would allow me to zoom in closer at the long end of its zoom range; I felt this might come in handy for closeups of shoe details.  The Canon also has image stabilization, which can make for sharper images by reducing camera shake, but using studio strobes made that irrelevant.  The short duration of the strobes freezes all types of motion. 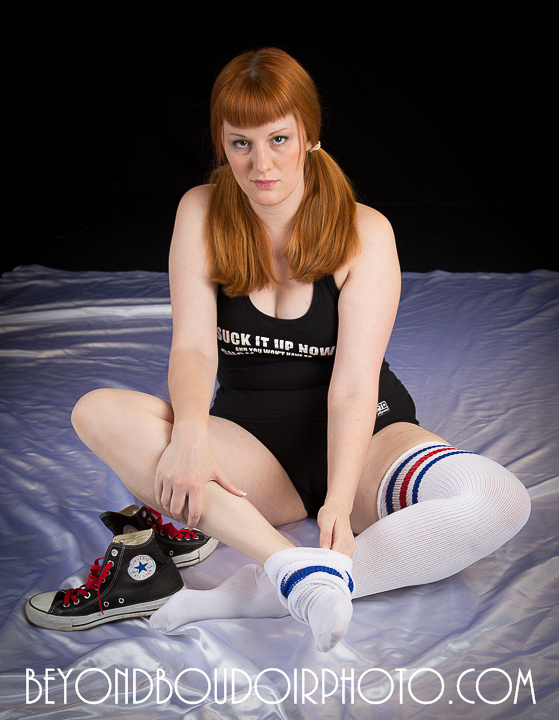 The Tamron offers a wider F/2.8 aperture, which gives you shallow depth of field and blurs the background for an artistic look.  However, I would probably be shooting at F/5.6 or 8 under the bright studio strobes, so that is another factor that is irrelevant for this shoot. The photo below, like most of these, was shot at F/6.3.  I focused on the foot and let the face go just a bit blurry. 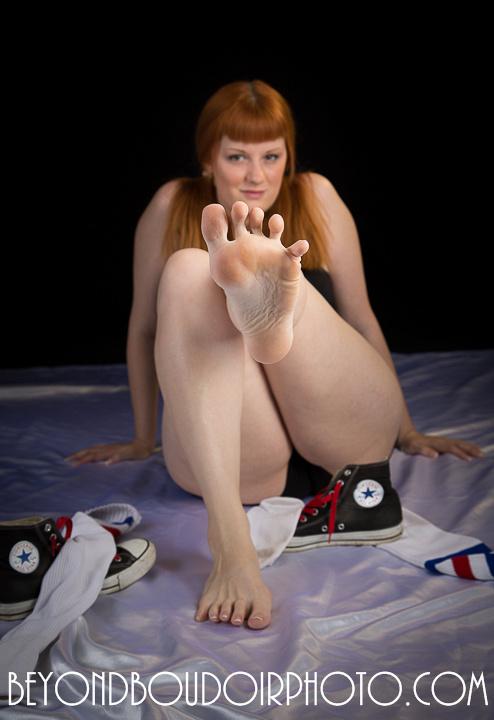 The Canon is definitely the sharper of the two lenses.  That, combined with the longer zoom range made me decide in favor of the Canon.  So I did the whole shoot with the Canon 24-105 F/4 L IS lens. In my opinion, the 24-105 is a real workhorse.   One reason it isn't talked about a lot by pro photographers is that it's not very expensive.  Canon flooded the market with these lenses by including them with thousands of camera bodies as part of a "kit.'  Some retailers break up the kit to sell the body and lens separately.  Right now, you can find these lenses for not much over $600 US on Ebay.

Another factor in favor of the 24-105 is that its a very durable lens.  The folks at LensRentals.com keep track of how often their rental lenses need repairs and they have said this is one their most reliable lenses.   I'm not hard on lenses, but it's nice to know it won't wear out easily from being used.

I would highly recommend the Canon 24-105 F/4 L IS lens to any Canon shooter who is making the upgrade to a full frame Canon body, but isn't ready to spend thousands for the really high end professional lenses. 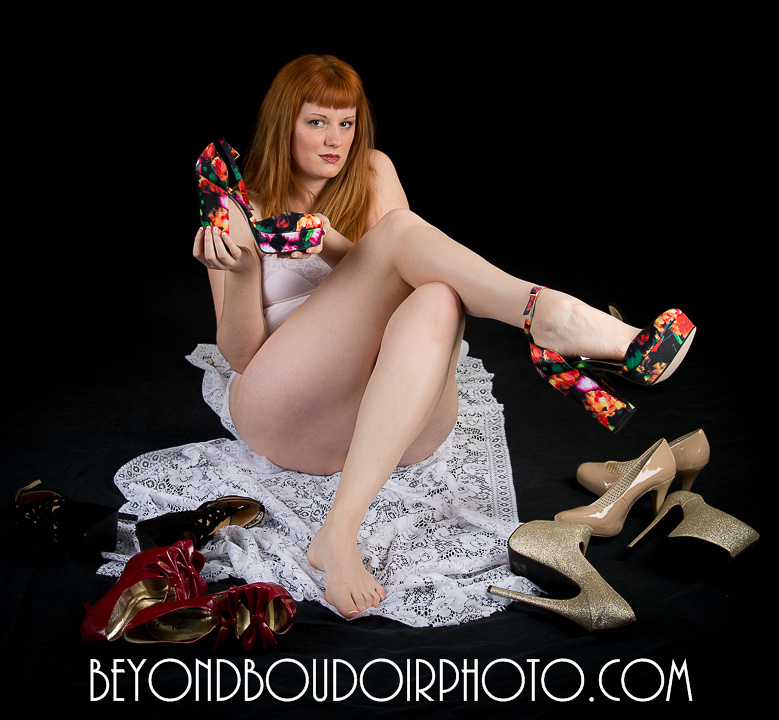 Of course I had to ask Faune to pose for one of my usual artistic nude portraits, so here she is without her shoes: Since we were shooting under controlled conditions, we got over 700 images for Faune to use.  Only a handful were rejects due to posing issues.