When a photographer doesn't have regular access to a studio, they are envious of photographers who do.  But those of us who do have a studio tend to get pretty tired of it after a long Winter of indoor shooting.  With the arrival of Spring weather, my model friend Maria shared my desire to do an outdoor shoot.  My photographer friend J, aka: Zen Hick Photography, kindly volunteered to be my lighting assistant, a valuable thing to have for a night photoshoot.  If you like the photos below, you can see all 150 images that I selected as "picks" or "keepers" from this shoot by visiting this gallery.  Keeping in mind the fact that Maria has modeling experience, I think the gallery can give a prospective client a rough idea of how I work.  Also please note that Maria is in her late thirties, not a skinny, 19 year old. 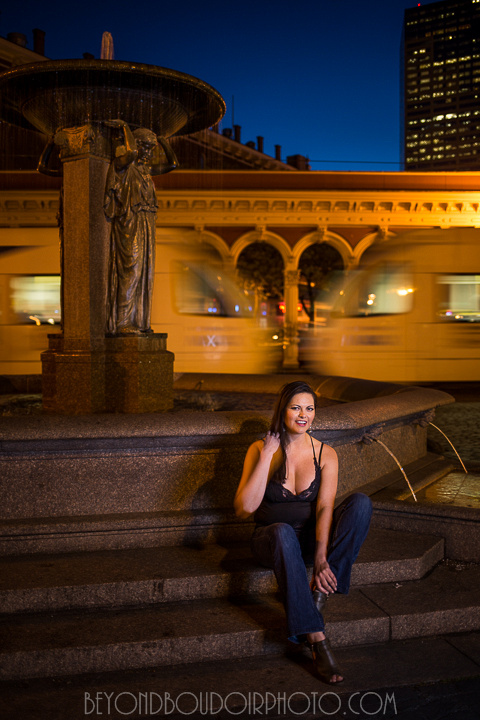 My plan was to shoot at some of the many fountains that are distributed around downtown Portland.  We started out at the Skidmore Fountain, as you can see in the image above.  It is in the old, historic part of Portland and has some cool white columns nearby that create an interesting background.   We arrived at dusk and took advantage of the fading light in the Western sky.  The MAX trains run by the fountain and you can get some interesting effects with slow shutter speeds. 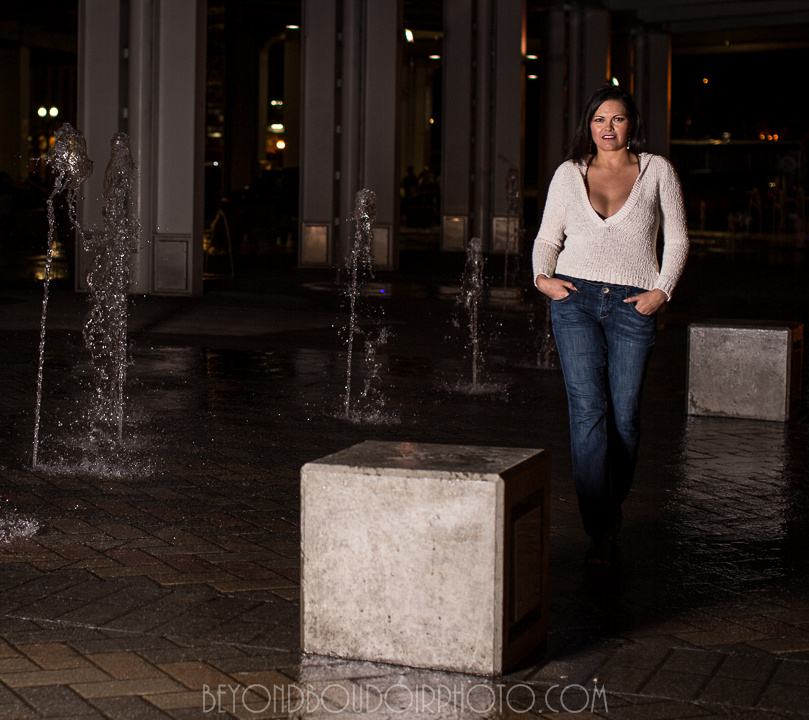 The photo above was taken at the site of the Portland Saturday Market, which just happens to turn into a fountain on weekdays.  The market area has a roof over it, which would certainly attract homeless folks when the market is not set up.  I could not find any info to back up my theory, but I would bet that the fountain is primarily there to keep homeless people from camping out on the nice dry Market site.

All the lighting for this shoot was provided by a single Alien Bees monolight powered by a Vagabond Mini Lithium battery pack from Paul C. Buff, the maker of Alien Bees.   The only light modifier used was a 30 inch umbrella with an integral white fabric diffuser.  This is a very cheap alternative to the popular Octobox units.  I don't like to take expensive light modifiers outdoors, because the wind usually knocks them over at least once.  Sure enough, our light stand fell over once and caused some damage to one of the umbrella spars. No problem, we used it for the rest of the shoot and I recycled it when I got home.  About $15 expended, not a big deal, I have more in reserve! 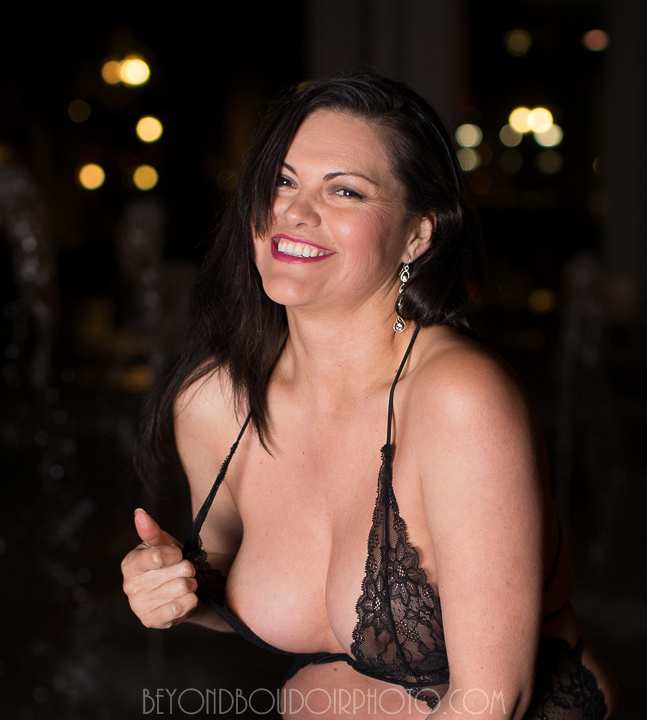 Maria decided to take off her sweater and kneel on one of the concrete blocks that was just outside the water spray.  It was a beautiful, warm evening after a few weeks of cool rainy weather.  One thing I've learned is to let models do their thing when they have a pose in mind.

There is a fire station in this area with nice glass doors.  It was a little tricky balancing the indoor light with the light from the Alien Bee, but it just took a minute.  We were able to include some brief nudity.  Nobody cared... this is Portland.

Did I mention the historic columns?  They make a great place to pose, especially at night.  We ended up spending an hour within fifty yards of the Skidmore Fountain, then decided to move to the next fountain on our list. 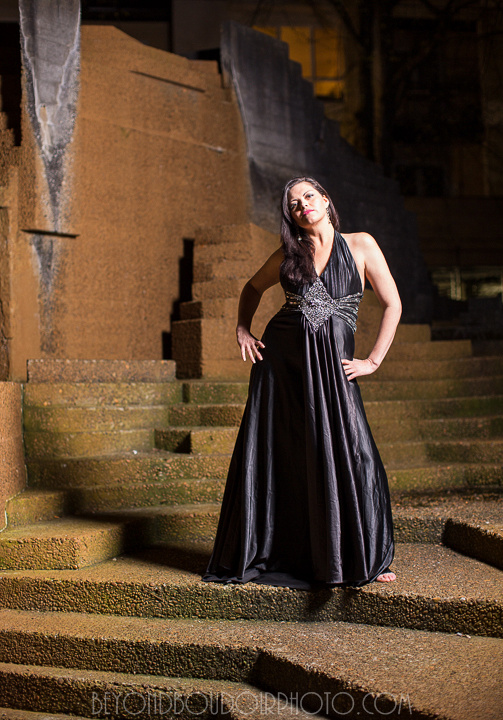 This is the Lovejoy Fountain.  If you follow the link for more info, you will no doubt notice that the fountain was turned off when we arrived on a Thursday night.  At first we were angry, but then we realized that the dry steps of the fountain made a fantastic place to pose our lovely model. 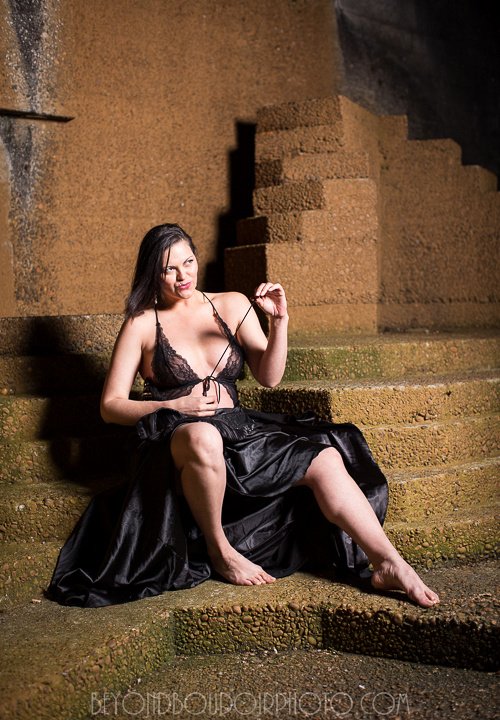 I think Maria enjoyed flirting with my friend J who was holding and aiming the light. 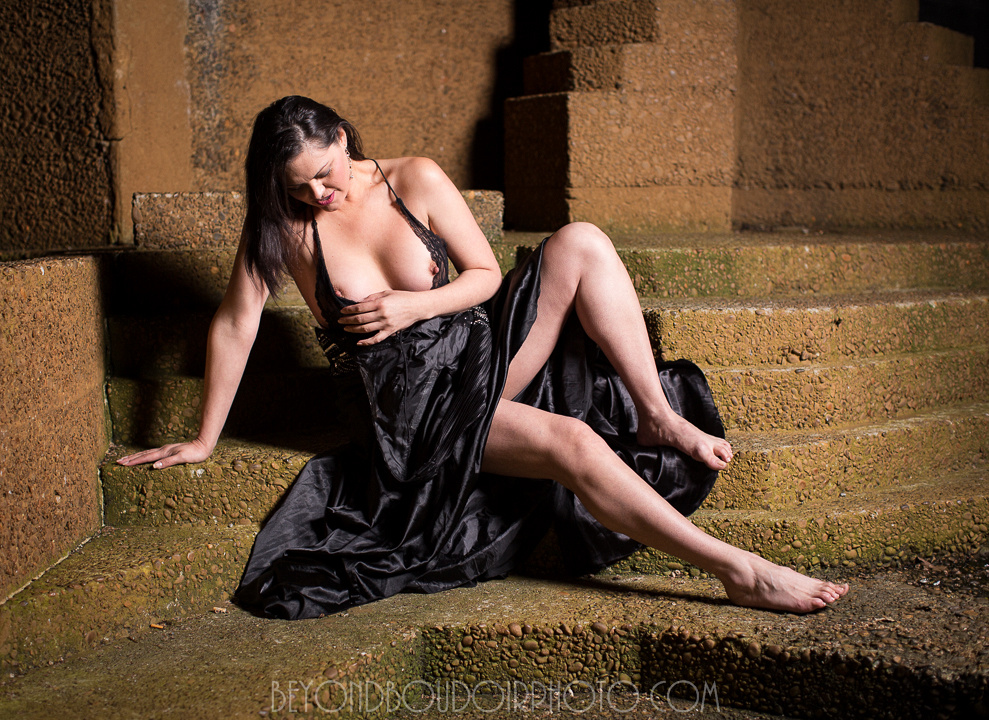 I liked this shot without any retouching, because it makes the model look strong and sexy, not soft.  A bit different from my usual style.  We spent an hour at the Lovejoy Fountain before we called it a night.  If you want to see all 150 shots from this photoshoot, (some NSFW) just click through this gallery.  No password needed.

Medici(non-registered)
Fantastic shoot - I really liked the one with the reflected light in the columns and the dynamic poses with the fountain water frozen in the shot.
Great model too - playful and excellent. Thanks for your blog & gallery!
-Medici
No comments posted.
Loading...