Studio Shoot With Adryana and the Tamron 85mm F/1.8 VC

Studio Shoot With Adryana and the

This edition of An Adventurous Photographer in Portland includes three elements.  The first is our lovely model Adryana, who recently moved to Portland and is available for paid work with local photographers.  You can find out more about Adryana on Model Mayhem, Tumblr or Facebook.  She's great to work with and very professional.

The second element is the location.  We shot these images in a very cool rental studio called Buck East Studio in Southeast Portland.  It's on the second floor of an old two story industrial building.  It is quite a large room, with tall windows running almost the complete length of the South facing wall.  There is also a very effective skylight if you want the light to come from above.  There are several movable panels that act either as white reflectors or darker neutral backgrounds.  The walls and floors are mostly white, so you are going to get soft light whether you want it or not!

There are two Alien Bees if you want to use them, but I go there for the amazing available light.  All the photos in this post were taken using natural late afternoon daylight on a partly cloudy Portland day.

The third element is the new Tamron 85mm F/1.8 Di VC USD lens which I received an hour before I was scheduled to head for the studio.  I did a quick focus calibration on my Canon 5D Mark III, like I always do with a new lens, and headed for the studio to meet up with Adryana.

Since 85mm lenses are considered portrait lenses, and that is certainly how I intend to use it, I started with a fairly standard portrait.  The very soft light is good for portraits, but makes it a bit difficult for a lens to show off its inherent sharpness.  Here is the full frame image of our first pose.

You may notice some darkening in the corners of the image.  That is called vignetting, which from a purely technical standpoint, may be considered an undesirable lens aberration.  In actual practice however, portrait photographers generally like vignetting as a style element.  If it isn't present, I often add it in post processing.   Let's crop this image down to more of a typical headshot and see how it looks. 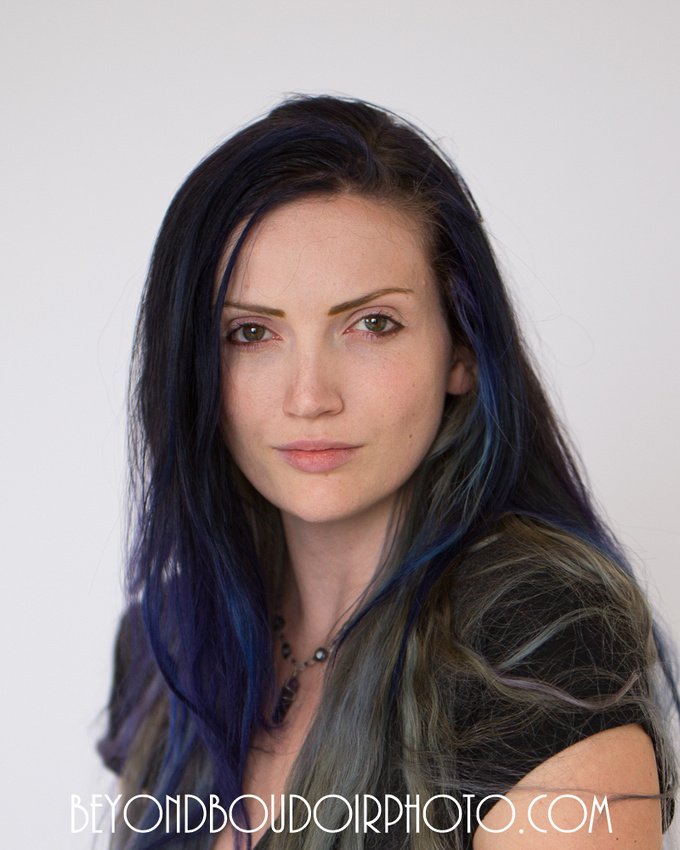 Not bad for an available light headshot with minimal makeup and no retouching.  This was taken at ISO 200, F/2 and 1/125th.  With my old Canon EF 85mm F/1.8 lens, the fine details would probably not be too sharp at this aperture and shutter speed.   Let's zoom in on the eyelashes and see how sharp they are.  My apologies to Adryana for not doing any retouching, but lens test shots should be unretouched.

We moved to a spot underneath the large skylight and I placed some white reflectors in front of the model to both the right and left of the camera to avoid the lit-from-above look.  This shot is cropped to about half the original size.

After working with the skylight for a while, we went back to the area illuminated with window light.  Here's another shot with the 85mm lens.

I moved back as far as I could and just barely managed to capture a full body portrait.  Generally, the 85mm focal length is not your best bet for full body shots, but I have to say this lens really is quite sharp, even near the corners. 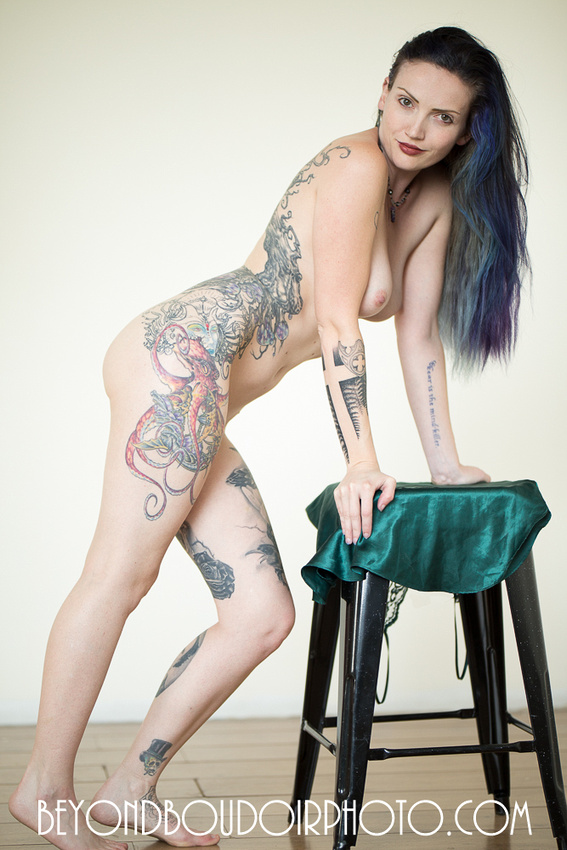 Still using the window light, I used a satin-like gold backdrop and switched to a lens I really like for full body portraits, the Canon EF 35mm F/2 IS.  All of the following images were taken with this lens wide open for a shallow depth of field. 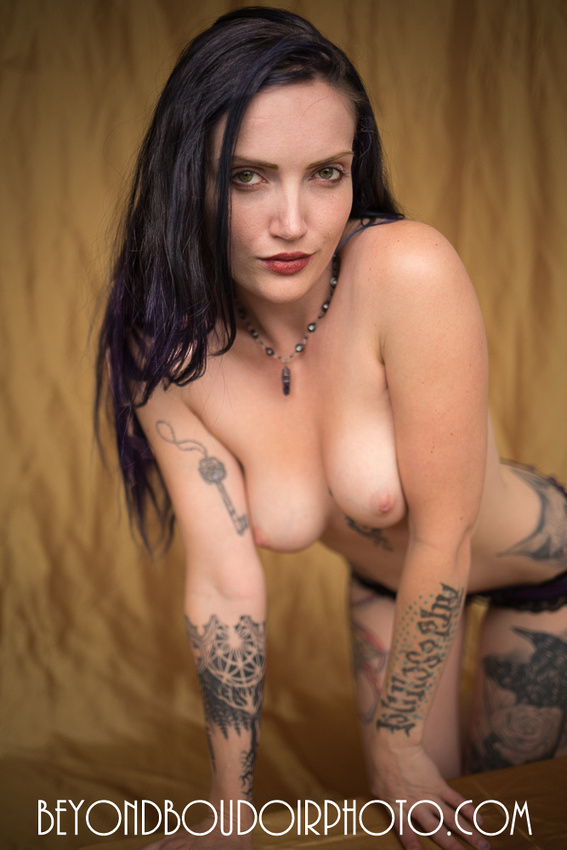 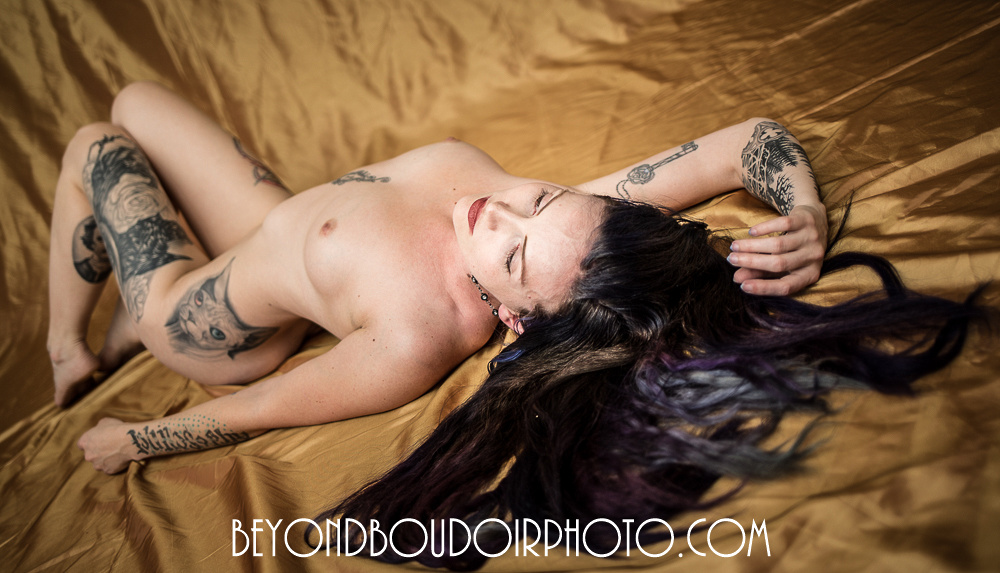 At this point, I decided to try shooting directly at the windows.  There are at various ways to make this work.  The simplest way is what you see in the first photo.  It is exposed properly for the model, while the windows are allowed to exceed the camera's dynamic range and go completely white.

Another fun option is HDR (High Dynamic Range) photography.  Without going into great detail, this involves shooting multiple images, in this case only two.  One was exposed for the model and one for the windows.  The images are combined with image processing software.   I used Photomatix Pro for this one, but I will often do this within Lightroom.  Note that I did not use a tripod.  The software is now so good that it will combine hand held photos quite nicely.  Photomatix tends to give you a pretty artistic or surreal effect compared to what you get with Lightroom. 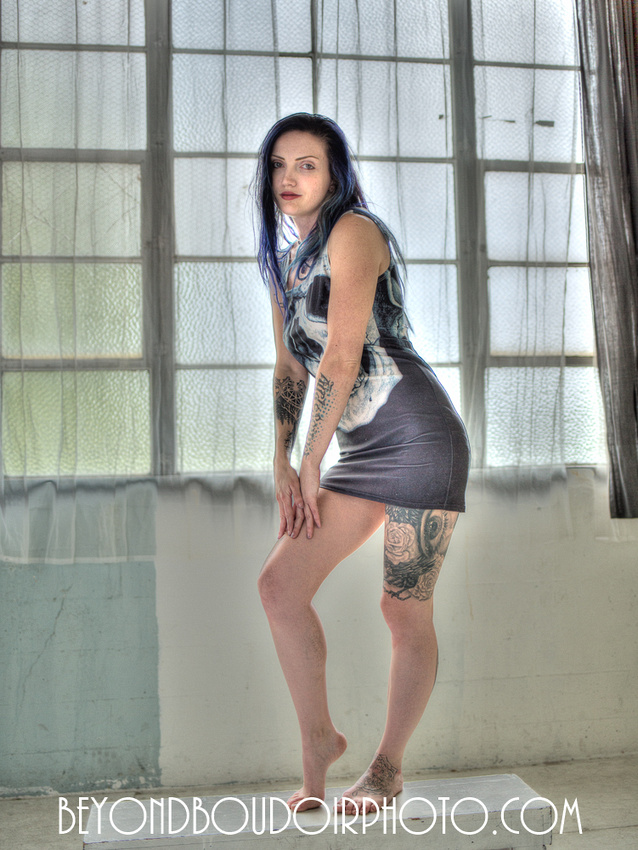 The new 85mm Tamron is definitely a keeper and so is Adryana if you need a great model in Portland.  That's all for this episode of "Tales of an Adventurous Photographer in Portland, Oregon."   See you next time!

Bernd(non-registered)
These pics are unfortunately way beyond what the lens is capable to do.
On my 4K Macbook they look fuzzy and not really crisp and sharp, maybe the resolution is low.
Have a look here what the lens can deliver on a 36MP body.
This a a 100% crop already.